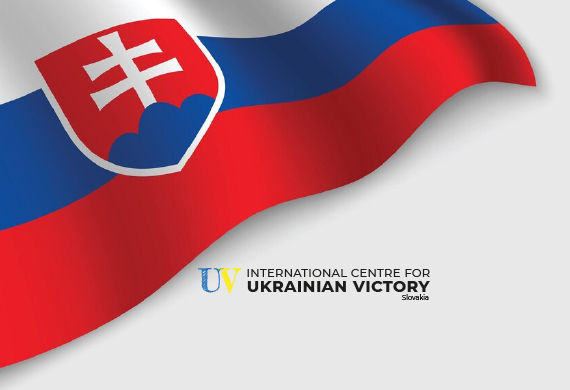 The International Center for Ukrainian Victory (ICUV) was founded in response to russia’s full-scale invasion of Ukraine. Warsaw is the headquarters. The ICUV branch in Slovakia opened in June. The mission of the center is to advocate for and defend Ukraine’s interests on a global scale, as well as to support actions aimed at accelerating victory in various dimensions over the short and long term, while also establishing horizontal connections between Ukraine and Slovakia. Slovakia is a country that borders Ukraine. Ukraine and Slovakia have everything in place to take their relations to a whole new level. That is why the presence of the Ukrainian public on Ukrainian territory is essential.

Because of the war, all ICUV members are forced to live and work abroad, and they are now collaborating to represent Ukraine’s interests on the international stage. They all have a clear understanding of the pressing needs that Ukraine must address in order to move forward, as well as strong connections with global stakeholders and partners and analytical expertise to significantly support these efforts.

Our activities for victory

Work with the Slovak public

Because of the war in Ukraine, many Ukrainians are forced to flee to other countries in search of a peaceful heaven. Over 200,000 Ukrainians are known to have crossed the Slovak border. This is a significant financial and humanitarian burden for Slovakia. It is critical that Slovak society does not regard the Ukrainian people as hostile, but rather as friendly. As a result, ICUV in Slovakia’s work aims to promote a positive image of Ukrainians in Slovak society.

The fight against russian propaganda

russian propaganda is developed at an extremely high level in Slovakia. It has been present on Slovakian territory for years and has already produced results — some believe that Ukraine is to blame for the war and provoked it. ICUV’s mission is to expose the truth to the Slovak people and combat russian narratives.

It is essential to find support for Ukraine in Slovakia, both from the general public and from decision-makers. Making new acquaintances and establishing contacts is thus critical for hastening Ukraine’s victory.

Online-discussion “A bridge back home” 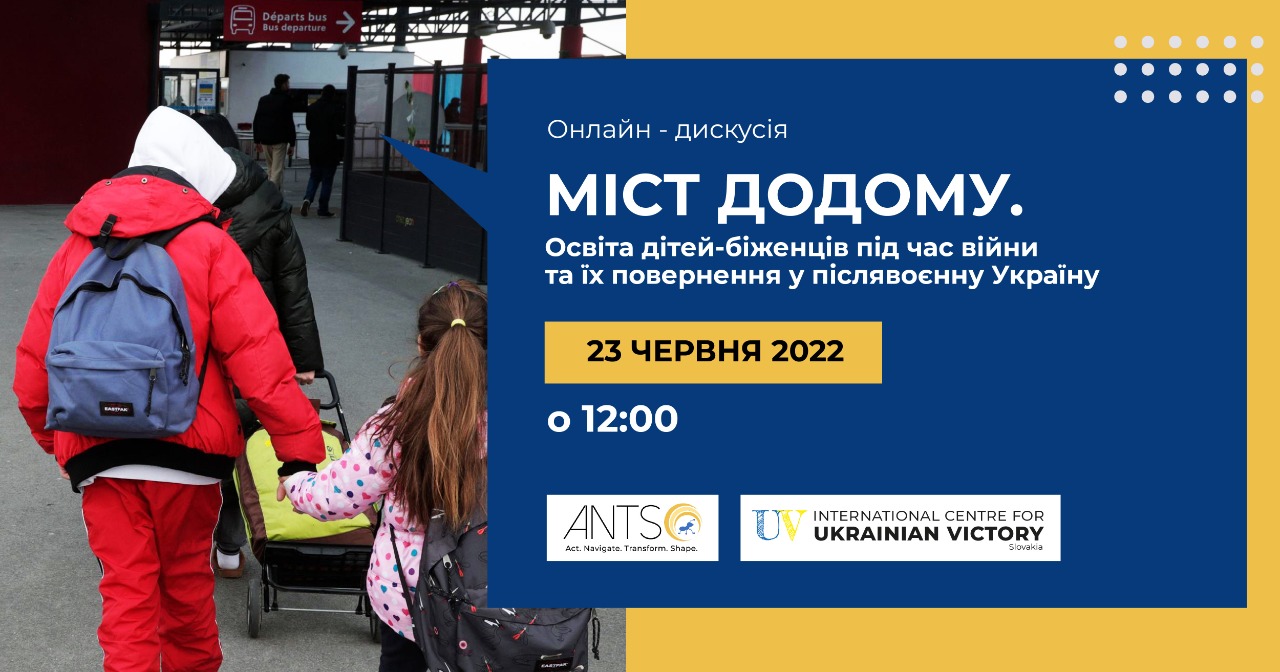 The issue of Ukrainian children’s education during the war is acute in both Ukraine and Slovakia, which accepted Ukrainian refugees. To preserve Ukrainian children’s knowledge and skills and their accumulation, particularly gaining new experience in Slovakia, and the correct integration of refugee children, it is critical to bring together representatives of education in Ukraine and Slovakia, public organizations, and psychologists to develop clear steps of work and interaction with traumatized Ukrainian children children and help them get a quality education and, in the future, facilitate the reintegration of refugee children. Ukrainian victory entails not only the complete return of Ukraine’s territories, but also the return of Ukrainian children to their homeland, where they will be able to continue their education and use it to benefit their country. That is why the International Center for Ukrainian Victory (Slovakia) (ICUV Slovakia) with the assistance of the National Interests Advocacy Network “ANTS” initiated the discussion “A bridge back home. Refugee children’s education during the war and their return to postwar Ukraine”.

Online-discussion “A bridge back home”

At the demonstration in Vienna, which took place during the General Conference of the International Atomic Energy Agency (IAEA), they demanded the exclusion of Russia from the Board of Governors of the IAEA.

Natalia Veselova, an expert in the field of social policy and reintegration issues, about the exhibition in Bratislava.

A documentary film about how people live in liberated Izyum. Unique videos of the city after the occupation.

Romana Kaklikova and Olga Plachkova. Olga is from Ukraine, and Romana is from Slovakia. They have been assisting the Ukrainians since the beginning of the full-scale invasion. This lovely couple spoke with the Charisma UA project. They discussed Ukraine and Ukrainians, as well as supporting Slovaks and dispelling stereotypes about us abroad. Nataliya Veselova, a member of the «ANTS», is the presenter.

Nataliya Veselova is a public figure, co-founder of the “Donbas” volunteer battalion, 8th convocation People’s Deputy, and member of the National Interests Advocacy Network “ANTS”. Natalya became an internally displaced person in 2014, when Russian troops occupied her hometown of Donetsk. She is fleeing her home for the second time today, this time due to a full-scale Russian invasion. We met in Slovakia and discussed Ukraine’s war preparations, the peculiarities of the Russian people’s mentality, crimes against humanity, and the importance of the civilized world’s support for Ukrainians’ freedom struggle. We invite you to watch!

Vita Bartos is a Ukrainian mother of three who fled to Slovakia at the start of the full-scale invasion. Vita decided to resume her teaching activities and start an online fashion design school for children after much thought about how she could help her country from abroad. Such classes assist Ukrainian children in recovering from their experiences, distracting themselves, and channeling their energy into creativity. This issue discusses how learning occurs, how lessons contribute to the preservation of the Ukrainian language, what kind of reaction parents cause, and the heroine’s personal experiences.

Dmytro Levichev, a photographer and rugby coach from Kyiv, has been in Bratislava for nearly 6 years. Dima anticipated a large influx of refugee children from Ukraine after the full-scale invasion began, so he decided to create free rugby training for them so that they could make new friends, get away from everything they had experienced, and adapt more easily in a new country. See why rugby is a universal sport, what training entails, how many Ukrainian children attend classes, which competitions they have already competed in, and what plans they have for the future in this story.

Maryna Sirovatka is a Ukrainian photographer who moved to Bratislava at the beginning of the Russian invasion of Ukraine in 2014. Now the woman is implementing a volunteer photo project, creating beautiful pictures for Ukrainian refugees who were evacuated to Slovakia. The team of the National Interests Advocacy Network “ANTS” met with Marina and talked about the peculiarities of a photographer’s work abroad, children’s adaptation to new conditions, the most difficult volunteer experience and personal experiences during a full-scale war. “Photography was a way of my internal emigration, and now it has become the main activity. I feel 100% Ukrainian and believe in the victory of my country,” shared Maryna Syrovatka. You can see the works of the photographer here: https://www.vogue.com/photovogue/phot…

The sphere of book publishing underwent significant changes as a result of russian aggression: many printing houses came under fire, and publishing house employees were evacuated to various cities around the world. The co-founder of the publishing house “Vydavnytstvo” Liliya Omelianenko temporarily left for Bratislava and told us how her business works in the conditions of war. “Vydavnytstvo” is the leader of Ukrainian book publishing in niches, about the existence of which few people know. We talked about best-selling books, the foreign market, partner support, personal experiences and book preferences of Ukrainians. We wish you a pleasant viewing!

According to UNHCR UN data, as of June 1, a total of 6.983 million people have left Ukraine since the start of the full-scale war. At the same time, according to UN data, 2.102 million people returned to Ukraine from February 28 to June 1, excluding data from Hungary, the russian rederation, and belarus. The story of each family that was evacuated abroad, fleeing from the war, is unique, but common in its pain, experiences and losses of the usual way of life. In this video, we collected the stories of 3 mothers: Svitlana, Lilia and Victoria, who left for Slovakia with their children. Why they made such a decision, what difficulties they faced, how they settled in a new city and whether they plan to return home – you cansee in the video.

Mykola Nevrev, a Ukrainian-Slovak baker, author and photographer, is one of the founders of the Bake for Ukraine – Palyanytsya project, where volunteers collect funds to provide Ukraine with food during the war. Mykola was born in Odesa, but has been living in Bratislava for several years and is engaged in baking. He loved this craft so much that he opened his own bakery, where Ukrainian refugees, in addition to Slovaks, now work. We talked about the culture of bread in Ukraine, the popularization of Ukrainian pastries in the world, and charitable activities for the victory of Ukraine.

Lyudmila Verbytska is the founder of the NGO “Ukrainian-Slovak Initiative”. Lives in Slovakia for 30 years. We talked about assistance to Ukrainian refugees, the attitude of Slovaks to war, cultural diplomacy and russian propaganda in European countries. “Ukraine will never be a colony,” Lyudmila firmly said and explained why. We invite you to watch. 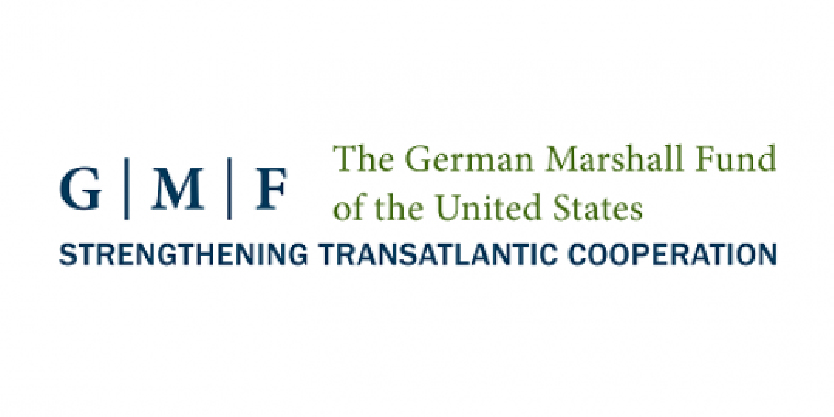