“You cannot betray this idea when friends died for better life.” Every day, we owe our lives to those who fight for our country, for peace, and for the sacred right to freedom and independence. The stories of the indomitable are about warriors who are doing the impossible for all of us now.

Victoria Kravchuk, a #ANTS communicator, spoke with Oleksandr, a Special Operations Forces sniper from Rivne. About the military path, the example of the father, the formation of the country, communication in the unit and the art of war.

When did it all start for you? How did you get on the path of a real soldier?

Unfortunately, I wasn’t even 16 at the time. And when my friends went to the volunteer battalion at the age of 16, they claimed that there were no documents and went to fight. At times, I found myself wondering: “Why wasn’t I 16 at the time? Why hadn’t I been born sooner?”

And I enrolled in the military lyceum in 2014. “Go wherever you want, I just want you to be happy,” my father used to say. And I have no regrets.

How do you explain why you chose this profession?

Father. A personal example. I have looked up to my father since I was a child, and any child, in general, tries to model father. This is the first person you see when you wake up. You can see the parents’ communication styles, as well as how they deal with certain problems. You see everything. A child, on the other hand, is essentially a sponge that absorbs information. He is my role model.

How did your February 24 begin?

I didn’t leave right away. Snipers were rarely used back then. When ours all left, it was up to us to form groups. Later, we were simply informed of what was going on in the Kyiv region. Then, with a backpack on your back, you’re gone.

What is being a sniper about? How do you feel when performing combat missions?

This has its own sense of romance. You don’t just do things like cleaning or do some operational work. You’re a sniper, which is romantic. You must be passionate about your work. This is a group of people – sharpshooters who enjoy what they do.
This is ballistics: understanding all of the processes, taking them into account, making this shot and hitting. It’s all about precision, observation, and the environment. Basically, you sit or lie down, usually in an uncomfortable position, and watch the same image for an hour to see if anything changes. This is not only an art, but a science that you must teach and that we must admire.

With optics, I am essentially the team’s eyes. I see what they don’t because I’m on top.
And, in essence, the enemy realizes that you are their number one enemy, and he then thinks correctly. But we must make them fearful of every rustle, every step, because each one could be their last.
When shooting at conventionally close ranges, you see the end result of your work: the final seconds of this creature’s life – and you have done your job, which is the most important thing.

Furthermore, your mission is not only to hit the target and locate the enemy’s hiding place, but also to protect your boys as they advance. They are aware that you are present and that you are their guardian angel.

Is each unit simply a group of people who share similar thoughts and opinions, or is there something more to it?

I understand that the unit is a specific idea a priori. Similarly, there is any special interest group in which everyone is friends with everyone else. They were all like-minded.

This is a family, and in a family, everyone looks out for everyone else. And family is not limited to blood relations. My family is my unit. It’s just that I have two families: one here and one there.

You understand that if my friend calls me right now and says he’s having problems, I’ll go to him. Wherever it is required.

What is important between you? Inside your unit?

It is critical to engage in dialogue. We have a lot of conversations. Everyone knows what needs to be said. Even if there are contentious issues, it is only for a few hours. Regardless, I know I’ll cover for my friend.

And, of course, authority. Our commander was constantly trying to get something into our heads. Constantly. Topography, engineering, combat training, and medicine are all areas of study. He always tried to do it not only so that we would swing, but also so that we would understand and be prepared for it.

Let us say that the life of the team members is heavily dependent on the commander. Will people obey this commander? If I see this commander is stupid, I will not follow him. And you believe the commander when he values his subordinates’ lives and does not want to risk them.

Is war in the head? Wherever you are?

When you fight, you clearly understand that you are fighting not only for yourself, but also for your family and those who are unable to go for moral, psychological, or physical reasons. And it will be extremely difficult for you to return to this society. It’s mundane to walk down the street without expecting something to fly by. I always get goosebumps when I hear a car honk or a whistle.

You just get used to it after a week of active shelling. There was a point when we had already left Irpen when everything came to an end. And a comrade whistled to his other comrade: “We all lay down.” Because it is already ingrained in the mind. You’re always expecting it. Even when it is quiet, it can be difficult to fall asleep. And why?… Especially in high-traffic areas. Because they moved forward in the silence. Nobody will go if an airstrike occurs.

Do you remember the first shelling? How was it?

When we first arrived in Irpin, we were fired upon. The 82nd mine was the first to arrive at us. I was still wearing a lot of gear. It was extremely difficult for me to leave. I also reasoned that if we are burned and an arrival occurs, it will be extremely difficult to flee. And all I hear is a whistle. I see a gap 70 meters from the front on the right. I simply lay down and lay down. It’s a good thing it’s not my forte. They then stood up and began running. Thank you very much. There was a small stream, and my feet were completely soaked as we ran along it.

The Russian army is openly mocked, are they really so weak?

It’s only funny until your friends die. It all stops being funny when you realize that… If you treat the enemy like a fool who is untrained, and you happen to be someone who is really skilled. What then?

Why did they still not succeed? How do you answer this question for yourself?

They did not succeed in Kyiv, I believe, because the people who received money there said: “everyone loves you there, everything is fine, everything will be fine.” They ruled out this possibility. They believe that because we are fraternal nations, everything will be the same as it is with their own. They are accustomed to treating their people as if they were dogs. They rolled the dice. They do whatever you tell them. And if they don’t, we’ll simply crush them. And they disabled this specific component. It is our people, our country.

They chose to catch us off guard, but we have many people who fought, wanted to fight, and are still fighting. There were on rotations at the time. Some simply resigned and stated, “I will come when the battle starts.” Because everyone in the military expected a second wave. It couldn’t go on for much longer…

How do you assess the situation now?

Our boys are handsome. Because, well, it appears to me that they realized they had nothing behind the line of defense and simply found it. They found a weak spot, applied pressure, and suppressed them. They simply began walking left and right. And they, the Russians, have no idea what is going on. They take off running. They understand that they will not be pushed forward in Kharkiv. They basically stopped moving everywhere they could. They simply stopped moving forward.

We destroyed much of their equipment and severely abused them. And they try to maintain this advantage at the expense of winter. Why is it winter? Combat in the trenches. They also prefer to do it through bargaining. We are aware of this. That is, trench warfare halts the conflict while simultaneously regrouping in the back side. This must be understood…

What other understanding should be in the heads of the military in order not to make a mistake in the fight against the enemy?

It is a mistake to think that you are the best and the most qualified. When you think: “Phew, what’s wrong with me, I’m special forces.” Artillery, tanks – they don’t care who you are. They don’t care at all. It is important to understand that you are just as human and your blood flows as your enemy. Your enemy is also afraid of you. That’s all. You should never think that the enemy is a fool. Most likely, if you think that the enemy is a fool, then you are a fool. Because you don’t understand his plans.

The motivation of our fighters. What is she about? Is it a common idea or personal reasons for everyone?

Everyone fights for different reasons. Someone goes to fight because this type of guy understands that there should be freedom, that this is his country, and that he is the only one who can decide how to live here, and not someone else. Someone seeks vengeance because his friends and relatives have died.

The most important struggle is one’s own. When friends died so that everything in this country would be good, for the idea, for the meaning of a better life, for their families, for the entire country. You must not betray this idea. 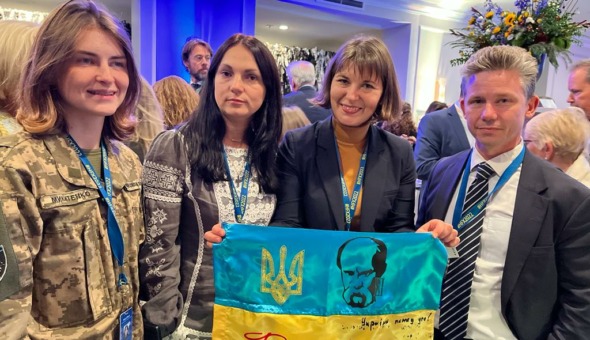 What other topics were discussed at the security forum in Canada? How to prot...