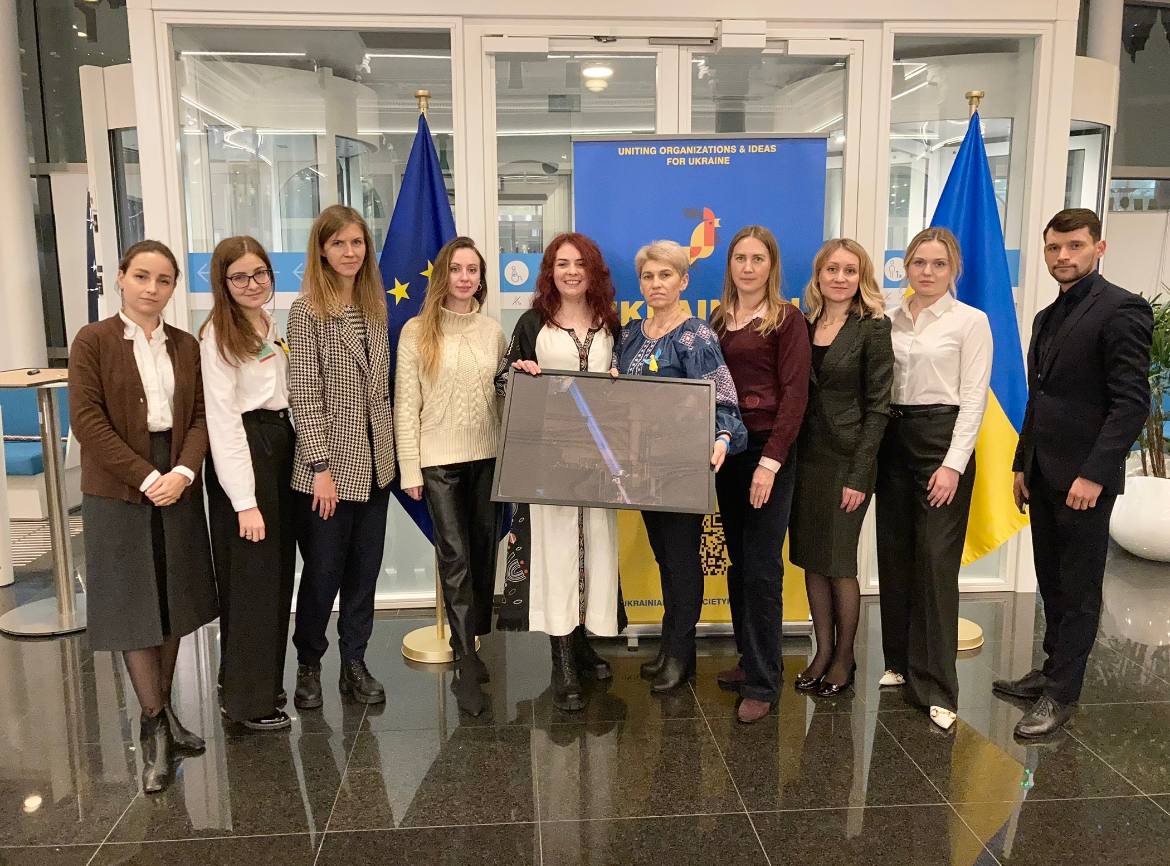 Kateryna “Ptashka” Polishchuk, Iryna Yurchenko, mother of Dmytro “Orest” Kozatsky, and representatives of civil society spoke in Brussels about the capture and protection of “Azovstal”.

The de-occupation of Ukrainian territories, the release of Ukrainian military and civilians from Russian captivity, as well as the rehabilitation of Ukrainian prisoners of war and a plan for their reintegration into peaceful life — on November 29 in Brussels, defenders of Mariupol Kateryna “Ptashka” Polishchuk, Iryna Yurchenko, mother of Dmytro “Orest” Kozatskyi, representative of ICUV Vlada Dumenko and representatives of the Ukrainian Veterans Fund — Karina Doroshenko and Olena Prihno, met with members of the European Parliament, journalists and members of the public.

During the meetings, the Ukrainian delegation informed representatives of the European Parliament and European partners about the inhumane conditions in which our defenders are being held in Russian captivity.

Kateryna Polishchuk “Ptashka”, who became the voice of “Azovstal” defenders at the events, emphasized:

“Only by working together can we bring home those who, at the expense of their own health, career, and family happiness, enable Ukraine and Europe’s peaceful populations to have this. russia is slaughtering civilians. Russia tortures detainees. russia never keeps its promises! Fires prohibited calibers, tortures prisoners of war, and mocks civilians. russia is a terrorist and criminal state, and criminals must be held accountable. Allow the Ukrainian army to be released and continue the fight”.

The defender went on to say that she will not be calm and will not stop fighting until our state has rescued all of our brothers and sisters:

“We died several times a day in Azovstal. During the war, a girl died in me. And now I’m just a soldier”.

“When we hear about the war, it’s scary. And when the whole world saw the photographs of my son Dmytro “Orest”, photos of wounded, mutilated soldiers from “Azovstal”, without arms, without legs, but with a living soul and faith in their eyes, the whole world community was horrified! In what inhuman conditions, without medicine, food and water, they defended their country. These pictures touched the soul of every caring person. They carried out the defense order, but they were taken prisoner… 4 months of captivity… 125 days of horror, the terrorist attack in Olenivka, torture and hunger… On September 21, my son was lucky – Dmytro was released from captivity… We all saw how our Ukrainian defenders were returned from captivity: thin, wounded, sick physically and psychologically, exhausted. This is unacceptable in the 21st century. There is still a war going on in Ukraine, there are many military and civilian men and women in captivity in russia. Many wounded soldiers,” – Iryna emphasized.

The defender’s mother demonstrated photos of “Orest,” who had returned from captivity thin and emaciated. Famous Ukrainian artists Kostyantyn and Vlada Liberovy took the photograph.

“Our European and American allies provide us with strong military support and assistance, without which we cannot defeat the enemy. We request and urge you to continue assisting us with weapons and sanctions in our fight against the Russian aggressor. To assist in the release of our prisoners, as well as the treatment and rehabilitation of our wounded fighters. We are a force when we work together! We will free our prisoners and Ukraine together! “- Iryna Yurchenko emphasized.

Civil society representatives should also draw attention to the need to de-occupy all Ukrainian territories, release Ukrainians held captive, and prevent further capture of both the military and civilian populations. After all, genocide against the Ukrainian people, atrocities, and war crimes are being committed in the occupied territories, including infiltration camps, torture, murders and executions, psychological violence, humiliation of honor and dignity, deportation, kidnapping, and forcible removal of children.

“Terrible atrocities and war crimes are taking place in the occupied territories – infiltration camps, torture, murders and executions, psychological violence, humiliation of honor and dignity, deportation, kidnapping, and forced removal of children,” said Vlada Dumenko, co-organizer of the event. Every day, we learn about the discovery of new torture chambers and mass graves in the de-occupied regions of Kyiv, Kharkiv, and Kherson. The longer Ukraine’s territories are occupied, the more people are killed, and the longer people are kept “in the basement,” tortured, and forced to live in inhumane conditions. The sooner Ukraine wins, the sooner we will be able to clear the land of the occupiers — and thus stop the genocide and save even more Ukrainians. Ukrainian human rights defenders and civilians are still being held captive. russia is constantly opposing the return of our people, and exchanges are extremely hesitant and slow. However, during counteroffensives, we have the opportunity to raise an exchange fund, encouraging the enemy to exchange and hastening the return of Ukrainians home. We request assistance in de-occupying our territories and liberating captives”.

Activists also emphasized the importance of advocating for and developing a plan for the rehabilitation and reintegration of Ukrainian prisoners of war into peaceful life. At this point, adopt Europe’s experience.

Karina Doroshenko, Deputy Executive Director of the Ukrainian Veterans’ Fund, spoke about the UVF and the work it does.

“We work with veterans, prisoners of war, and active military personnel who will gain veteran status after returning from the front. Ukraine is now becoming a country of veterans, as the number of veterans has risen to 400,000 in the eight years since the russian-Ukrainian war began in 2014. This figure has now risen to 1,200,000 “She was emphatic.

On the same evening, the Ukrainian delegation attended the opening of an exhibition of Dmytro “Orest” Kozatskyi’s photographic works for guests from the European Parliament, civil society representatives, and journalists, organized by Witold Vashchikovskyi and Andryus Kubilyus. Following the presentation of Orest, Konstantin, and Vlada Liberovyh’s works, they were signed by Iryna Yurchenko and Kateryna “Ptashka” and presented to European Parliament representatives.