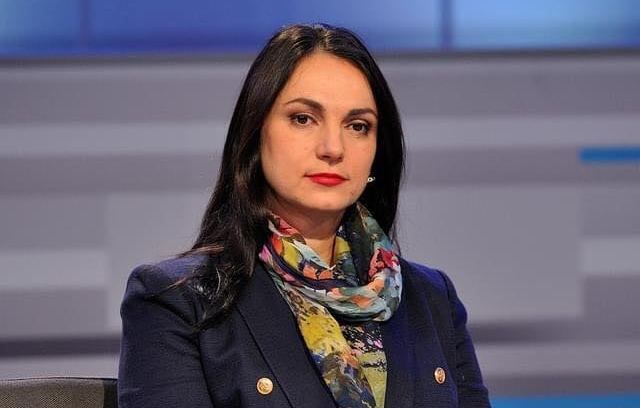 God reserved the 21st century for Ukraine. And it is Ukraine that should not only return Crimea and Donbas, but also de-imperialize the russian federation.

During an interview to “Ukrainian Prism,” the leader of “ANTS” emphasized this.

“russian armed aggression, in fact genocide, is a civilizational war against values in general. And now we have our special mission in the twenty-first century. My professor once said that God had set aside the twenty-first century for Ukraine. I thought at the time that it sounded very proud. But it’s only recently that it’s become clear how much responsibility this places on our society, on our front-line defenders. This is a global responsibility, because Ukraine’s victory is more than just the restoration of territorial integrity and sovereignty; it is also more than an international tribunal and the punishment of a totalitarian regime with the prospect of reparations. The aggressor has been completely de-imperialized,” – Hanna Hopko explains.

The leader of the “ANTS” emphasizes that since the beginning of the full-scale invasion until today, there has been a fundamental shift: from doubts about whether Ukraine should be helped to complete admiration for the courage of the Ukrainian Armed Forces and, by extension, Ukrainians.

“These were significant changes. From the fact that he met with US Secretary of State Blinken, as well as a congressional delegation, who sat and cried when we showed photos of Ukrainians, particularly a man who stood with a photo of his wife and child, realizing from the suitcases that they are no longer alive. We cried, and they cried and cried with us. At the time, it was critical to demonstrate that all intelligence institutions’ forecasts were wrong, that Ukrainians will fight for victory, and that this century is truly Ukrainian. As a result, I went from doubting whether Ukraine should be helped or whether Ukraine is capable of defending itself to complete admiration for the Ukrainian Armed Forces as the most powerful army and Ukrainians as the funniest nation during this time. When I was in Taiwan, they were astounded by our fortitude and inquired as to how we were fortifying our society’s defenses and bonds in order to counter propaganda. As a result, I scored a lot of changes during this time,” – she says.

Hanna Hopko underscores that the most important thing right now is to persuade the world that total military defeat of russia and de-imperialization of the aggressor is in the interests of the United States, the European Union, and the collective effort.

“This is constant routine work that is often unseen. Every day, there are dozens of meetings. There are times when you realize you don’t have any strength, but you remember the guys in the trenches and you quickly mobilize. Working in the foreign affairs committees since 2014, we have convinced the world that all of these political and diplomatic means of dealing with russian aggression will not result in peace or victory. And we give you the right. As a result, the West’s entire containment strategy and policy proved to be a failure, leading to genocide. The West is also to blame for allowing the genocide against Ukraine to occur. As a result, our task now is to remind the entire civilized world that any attempts to bring us to the negotiating table before the withdrawal of all Russian troops and the tribunal are completely futile”.

“Putin’s machine has been working for 20 years to divide the West. There are now entire political parties working on a comprehensive agenda. As a result, our task was to clearly articulate that the aggressor state’s imperial policy had been in place for centuries. Beginning in 1721, when Peter I renamed the Moscow kingdom russia, stealing the name of Ukraine’s – Russ. And when you explain the gravity of Russia’s occupation policy, that these crimes against humanity, war crimes, are not the first time they have occurred. “Let us clear the way, and then there will be democracy,” we are told. We respond that listening to the stories of some phony Russian oppositionists is sufficient, because we witnessed Stalin’s genocide against Ukraine in the twentieth century. Was the communist regime penalized? The collapse of the Union marked the end of communist ideology, but not of colonialism. Let us recall the Chechen war, as well as Georgia, Ukraine, and Syria. We’re attempting to explain why this is such an important issue to us. This is necessary so that authoritarian regimes, particularly those with nuclear weapons, see the example of Russia’s defeat and the tribunal and reconsider committing acts of aggression”.

Hanna Hopko mentioned during the interview:

“Putin launched the largest geopolitical crisis, not just a crisis, but an irreversible mechanism – these Putin actions will have a boomerang effect on their history. He is so determined to restore the Soviet Union that his actions, together with those of his regime, will result in the demise of this half-empire,” said the leader of the “ANTS”.

More details in the full version of the interview at the link: