The war of values: libraries as battlegrounds on the information front 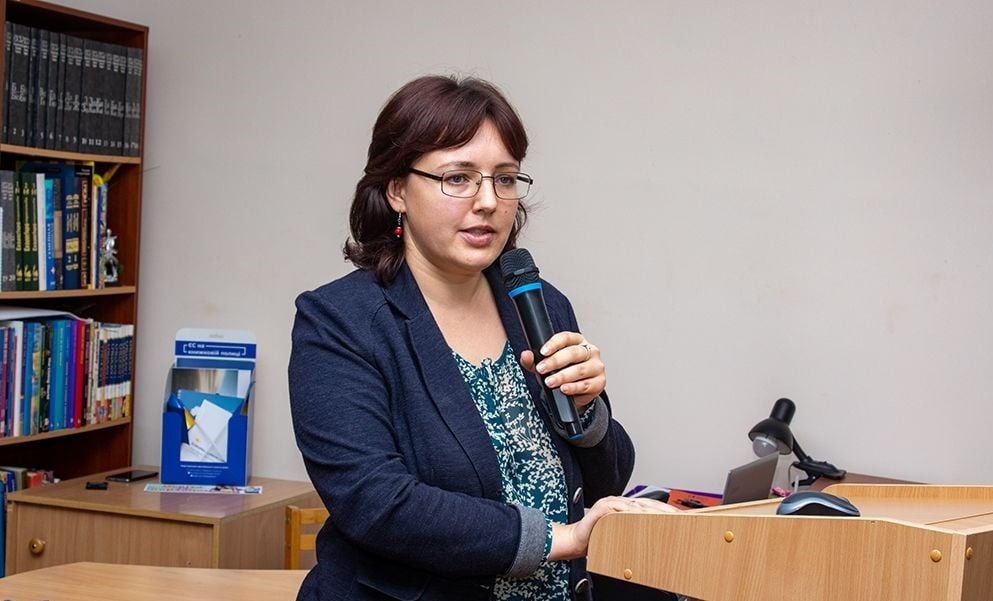 The key to victory is cooperation and unity, because it is what transforms us into warriors who defend our land from the Russian horde, each working on his own front. And, as the military retakes territory seized by occupiers at the front, the Ukrainian library is emerging as a powerful center of the information struggle.

On the occasion of the All-Ukrainian Day of Libraries today, September 30, we spoke with Lyusyena Shum, a cultural expert with the National Interests Advocacy Network “ANTS” about why the Ukrainian library today is a strong informational rear and an educational front of communication with external audiences in the context of modern war.

“I’d like to emphasize the importance of libraries in three areas:

The information component of library work is essential, especially for institutions that were displaced and lost their premises as a result of the occupation. They now work remotely as displaced persons in other cities. These libraries have the potential to become battlegrounds for information. Yes, they have lost their physical location, but they still have their communication channels through which they can and must fight fakes and propaganda and become information battlegrounds. As a result, it is critical to support this resource today,” says Lyusyena Shum.

Many libraries have become consultation centers for IDPs.

“Under the new conditions, these are also advisory centers for people who have been forcibly displaced.” People who have fled the war are given information about the work of various bodies and institutions, volunteer centers, and so on. Furthermore, the library itself frequently transforms into a humanitarian center where basic necessities can be obtained. Such humanitarian headquarters, for example, are based on the Kotlyarevsky Regional Scientific Universal Library in Poltava and the Lviv Regional Library for Youth. There are also a number of libraries that have evolved into true psychological support centers. Under martial law, they are almost the only publicly accessible, free public space of support.After all, in addition to traditional readings and writer meetings, film screenings, master classes, and other events are organized here. There are even those who organize Israeli-style psychological courses for children. We’re talking about “Hibuki,” also known as a hugger dog. This is the name of a unique therapeutic toy that once assisted Israeli children in their psychological recovery. She now rescues young Ukrainians from the horrors of war. “Parents really notice the therapeutic effect after a short session with a psychologist and getting to know Hibuki,” – says an ANTS member.

Lyusyena Shum emphasizes: Ukraine should invest more in culture, especially during the war, because today we are fighting for values.

“The Coordinating Headquarters for Deoccupied Territories of Ukraine’s Ministry for Reintegration of Temporarily Occupied Territories is drafting a special law that will establish the legislative framework for priority actions to restore life in these territories.” These are new features of military administrations’ work, as well as the beginning of the work of institutions and institutions. The project’s initiative group “Lib: continuation.” The library is a source of strength for the Ukrainian community: we are recovering to become better,” proposes including the issue of restoring the work of libraries and other cultural institutions as soon as possible in the Draft Law on De-occupied Territories. That’s right! Because libraries remain a free public space during the war, where people not only read or use the Internet, but also solve urgent community issues and organize real support centers for refugees, providing them with assistance, as well as volunteer headquarters, where they gather to assist our defenders. Some libraries do, in fact, weave camouflage nets for frontline fighters. They currently work with the population both on-site and remotely. “Even those who were forced to evacuate continue to engage in online activities,” – she says.

The existence of libraries in occupied territories ensures the country’s information security.

“Libraries are no longer just book collections; they are also information centers for community development, digital education hubs, and so on. As a result, when it comes to restoring the sphere of Ukrainian culture in de-occupied territories, libraries should play a leading role, and maximum guarantees should be provided for the preservation of their basic network, as well as other cultural institutions,” – Shum says.

She emphasizes the importance of changing education financing “according to the residual principle” today.

“In Ukraine, cultural allocations were made using the residual principle. Priority was given to road construction, etc. Meanwhile, russian propaganda was effective, and we now see that we are fighting for culture, because culture is about values. At the moment, 514 objects of tangible cultural heritage in Ukraine have been severely damaged or destroyed by russian federation troops. Ukraine’s UNESCO World Heritage sites are also under threat of destruction. And, as in previous years, the State Budget 2023 project anticipates a significant decrease in cultural spending. Spending on culture and art has been cut by nearly 40% in Ukraine’s consolidated budget for 2023 compared to 2021. The Ukrainian Book Institute’s funding, support for book publishing, and global popularization of Ukrainian literature were all reduced by 88.8%. This is a known wrong way. This must be changed.”

“Today, I’d like to wish all librarians and Ukrainians who care about reading a happy holiday. I wish us all victory, good books, and the survival of Ukrainian publishing houses during the crisis. Let us help our publishers and libraries. And I also urge residents of all Ukrainian villages and cities to visit their nearest library today to see what it can offer you, and to offer it yourself. It could be a new book as well as a joint event, for example. Glory to Ukraine!”