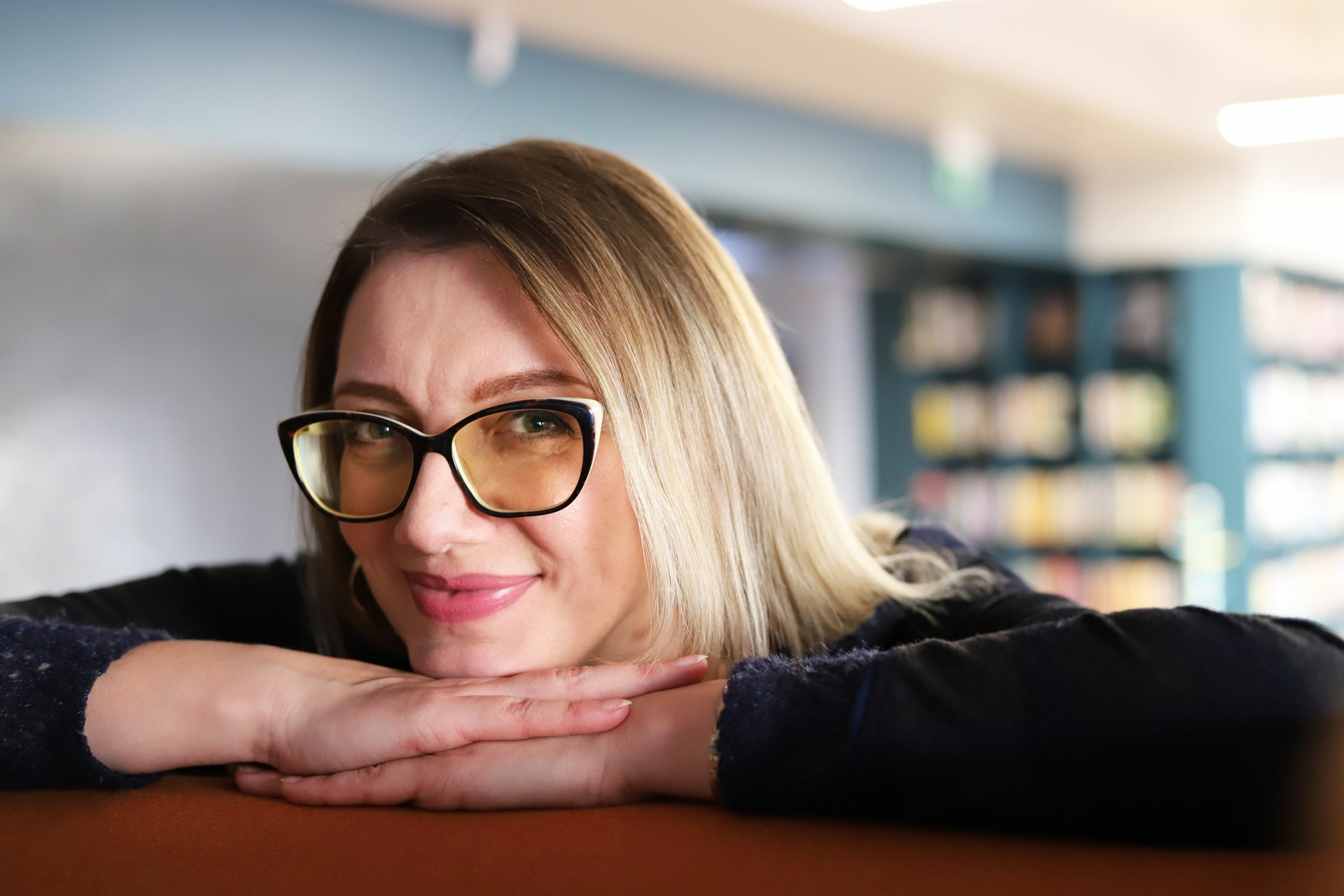 Little Bird, who bravely defends the Steel Palace from a tornado and ends up in a deep dungeon where her singing provides strength to the soldiers. And Evil, terrified by the strength of a steel heart, flees – a Ternopil storyteller wrote a fairy tale dedicated to the “Bird” Kateryna Polishchuk. Magical stories about other heroes of our time emerged from the writer’s pen. She has already written more than two dozen fairy tales about the newest heroes in the eight months since the full-scale invasion of russia, and each one encodes not only an incredible story of heroism, but also a mad love for her native land. We talked with Iryna Matsko about the art of fairy tales during the war, fairy tale therapy and Ukrainian children.

The author notes how, as a child, she reread all the fairy tale books in the local library where she lived.

“She was a huge fan of fairy tales. I’m a big reader. I knew every book in the local library and had read them all several times. When her children were born, she began writing her own fairy tales. When I had to explain some situations, phenomena, etc. to my son and daughter, I began inventing the first stories. I always find that using images to explain a concept to children is more effective. Later, I began publishing on literary portals on the Internet in order to receive feedback. I wanted to hear what people who didn’t know me thought about my work; it was interesting to see how they perceived it. After receiving numerous positive reviews, I dared to send it to Ukrainian children’s magazines. This is how my fairy tales first appeared, first in magazines, then in separate books,” the author explains.

In total, the author has over 400 fairy tales in her work. More than twenty books have already been released, including book-albums, collections with other authors, and standalone titles.

“My first fairy tale was “How a Cow Became a Princess”. I was born in Ternopil, but I spent most of my childhood in a village near the city with my mother and grandparents. She also frequently assisted them in grazing the cow. Because she is a nurse, I knew life in the village would be impossible without her. And, in fact, the first fairy tale, “How the Cow Became a Princess,” was written for younger preschoolers, just like my children. This is the story of how a cow was chosen to be the queen of domestic animals,” – Iryna Matsko says it was not published as a separate book, but it is available on the Internet.

About a favorite fairy tale in childhood

“I’m constantly asked about it. I first considered this question about four years ago, when I began participating in fairy-tale therapy. In general, certain moments can be defined by the type of fairy tale a person enjoys, which is why I remembered that my favorite Ukrainian fairy tale was “Little Khivrunka.” She was also a fan of the Romanian fairy tale “Fet Frumos with golden hair”. But I didn’t like “Hansel and Gretel,” in which the father takes the children to the forest and abandons them. I couldn’t fathom how this was possible”.

Fairy tale plots and ideas are always inspired by real-life events, but these magical stories are mostly written at night.

“I don’t practice any rituals. Most importantly, no one can stop you from immersing yourself in a fairy tale. This is the most crucial point. Everything else is irrelevant. Perhaps the atmosphere is important, but the most important thing for me is to be alone. Because the most difficult thing is being pulled out of a fairy-tale world while immersed in work. That is why I write at night, knowing that no one will move until the morning,” – she claims.

The author says: it happens that stories are dreamed.

“In general, my dreams are very vivid and colorful.” I frequently wake up with the sensation of having just left a movie theater. And I make a note of it. True, there are some that I immediately wrote down and intend to turn into a fairy tale because they were so vivid, but they are still in draft form. The concept was fixed and did not evolve further. A fairy tale called “Darinko from the Caramel World” was planned, and I was there to feel the atmosphere, but the plot never materialized. Another spark must exist. In general, I see fairy tales as magical; I believe that by writing them, you can “program” the reader and instill many values, attitudes toward goodness, a happy life, and patriotism. That’s why I’m writing more carefully now, because the stories are about the war. It is critical that these stories, which I am currently writing, end happily, as this should be the case in every fairy tale: the triumph of good over evil. As the war continues, I write cautiously, but confident that everything will be fine. I try to foresee this ending using a fairy tale. “I believe that my and the readers’ visualization and adjustment to the fact that everything will be fine will be realized as soon as possible in life,” – says the storyteller.

About February 24 and the first tale about the war

“I awoke earlier than usual on February 24.” The news informed me of the war. She roused the children and led them to their mother. We should all be together, I thought. We spent the first night in the basement sleeping on potato sacks. They then packed their belongings, got in their car, and drove to the Polish border. The trip took three days. We took the mother and son to the border. He huddled close to her, terrified, and kept asking, “Where will dad be when he comes to us?” Dad went to defend Ukraine. Even though I couldn’t write for the first two weeks, I couldn’t get this story out of my head. But I recognized that millions of our children had fled Ukraine in fear and uncertainty. It’s due to stress. I wanted to write a fairy tale for such a boy and other children in similar situations to help them relax. Then came the fairy tale “The Grasshopper, the Fire that Illuminated the Stars.” This is the story of a small grasshopper who was forced to flee into the forest after a locust attacked their meadow. His father was left to trample the locusts with other animals, and he and his mother had to hide in the forest because it was safer there. The forest animals accepted them. The grasshopper’s task was to obey his mother, to learn, so that when his father-strength horse’s was gone, he could light the stars himself. It was the first, perhaps a small therapeutic fairy tale for such children who had to leave their homes”.

“I always tell my young readers that fairy tales can heal them”.

When Iryna Matsko began writing, she became interested in fairy-tale therapy. She emphasizes that she feels a strong sense of responsibility for the books she writes for children. She finished a fairy-tale therapy course three years ago.

“I could go on and on about fairy-tale therapy for hours. This is a subject that I am very interested in. When I tell children that fairy tales can heal them, they look at me with wide eyes. Then I explain that, while we can’t cure the throat, we can cure a lot of other things. Storytelling therapy, in my opinion, is work with images and the subconscious. When a child hears a fairy tale, it is due to detachment, because we have no boundaries of protection and simply listen to it openly, there is the necessary information that falls on the subconscious. The goal of fairy-tale therapy is to demonstrate how to do things using a fairy tale. After all, this method deals with a wide range of internal emotional states. It can help both children and adults understand themselves and the world through images, as well as overcome various fears, aggression, and correct behavior. We have a tendency to believe what we are told. As a result, fairy tales were always passed down from generation to generation when adults wanted to warn or teach children. The fairy tale encoded everything, the author says. – I write modern fairy tales about the war, encoding certain images in them that can and should be used to build bridges between the fairy tale and real life”.

According to Iryna Matsko, our Ukrainians will need a lot of fairy tales now and after the victory to help heal the psyche of large and small Ukrainians from the consequences of the war, because children, for example, now have a fear of airplanes, missiles, and basements, and the feeling of security has vanished.

“With the start of the war, many writers began to write therapeutic fairy tales, which is very good and necessary, but it is work with the result of stress. It is also important to share patriotic stories, which may serve as a preventative measure or a warning so that this does not happen again”.

About fairy tales in the war

The writer has been in Poland since the beginning of the full-scale invasion, and she claims that when she first went abroad, she couldn’t write at all. I was always keeping track of what was going on. Some news, on the other hand, were so impressive that the storyteller transformed them into magical stories so that children and adults could strengthen their faith in victory even more and witness the strength, courage, and patriotism of our defenders.

“Life has changed dramatically, as have priorities. That is why I am unable to complete the works that were not completed prior to the war. Today I’m writing about what bothers us all: our country, our heroes, and so on “- explains the woman.

She has already produced stories about the marine Mykhailo Dianov, the bird Kateryna Polishchuk, and other war heroes. The author wrote those important values that are broadcast and for which the defenders stand in each of the stories.

Iryna Matsko told us about her plans: “I’m currently working on other projects. The story of the horses that burned in Gostomel breaks my heart, and I feel compelled to write about them. Similarly, there was the girl whose contact information was written on the back so that her relatives could find her if her parents died. In fact, there are many stories that are upsetting, and we must work with them”.